When we heard Paula Pant’s story, we knew she had to share. The blogger behind Afford Anything, Paula saved $25,000 after college graduation so she could spend two years traveling wherever, whenever she pleased. You may not have the same aspirations — maybe you want a relaxing retirement, a shorter vacation, a home of your own — but the approach to saving for a goal is universal. 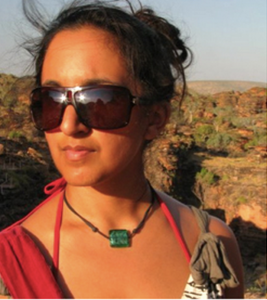 When most people graduate from college and begin their first “professional” job, they increase their standard of living. They get a larger apartment. They buy a car. They highlight their hair, get pedicures, dine at restaurants.

And that’s exactly what I did. I refused to let my standard of living increase. Why? I was driven by a powerful incentive: I wanted to travel the world for at least two years, without working during that time.

That’s right, I wanted to be unemployed.

Traveling the world is a normal enough goal, especially for a bright-eyed fresh college graduate. Plenty of my peers were achieving their globetrotting dreams in conventional ways. Some found jobs that allow them to travel for a living. Some volunteered overseas on farms or in schools, in exchange for room and board. Some joined the Peace Corps.

Those are all noble pursuits. But it wasn’t what I wanted. I wanted to be free to traipse the globe without a single encumbrance. No obligations. No responsibilities. Pure freedom.

So I took a two-pronged approach: I ramped up my earnings and slashed my expenses.

I worked full-time as an entry-level newspaper reporter, which was satisfying but poorly-paid work. While my colleagues drowned their sorrows in happy hour specials, however, I hustled. After a long day on the job, I’d head home to write freelance articles for extra income. I worked almost every evening and weekend.

Meanwhile, I slashed my expenses. My studio apartment was so small that I could reach the kitchen sink from my bed. My utilities, for an apartment that small, were next-to-nothing. My car cost $400, and no, that’s not a typo. I negotiated it down from an asking price of $450.

I shoveled my income into a savings account earmarked for world travel. I kept myself motivated by hanging a huge poster of a world map above my bed. I’d lay awake at night, dreaming of all the places I’d see: the Pyramids, the Taj Mahal, the Great Barrier Reef.

By the time I was 24, three years after I graduated college, I was ready. I had saved $25,000 and had enough funds to travel the world for two years, nonstop, without working.

I spent about half of that time in countries where the dollar-exchange rate worked in my favor: Southeast Asia, the Middle East, northern Africa. In those spots, I could live like a princess: sleeping in beachfront guesthouses, eating at restaurants, even getting massages.

I spent the other half of the time in developed countries where the dollar-exchange rate worked against me: Europe, Australia, New Zealand. In those spots, I lived a much more austere lifestyle, spending countless nights camping in the desert or couchsurfing with local hosts.

I saw the Pyramids, walked the Taj Mahal grounds, snorkeled the Great Barrier Reef. I visited the Leaning Tower of Pisa, the ruins of Angkor Wat, and the komodo dragons of Indonesia. I went to soccer games in Austria, beach parties in Thailand and temples in Jerusalem.

And what had I really given up in order to get that dream? I lived in a small apartment. I skipped a few happy hour cocktails. I wrote some extra magazine articles. It wasn’t a huge sacrifice – not compared to everything I gained.

About Paula: Paula Pant blogs at AffordAnything.com about building wealth and living life on your own terms. She’s traveled to nearly 30 countries, owns six rental units that produce thousands in passive income each month, and runs her own digital marketing company. She proudly hasn’t held a 9-to-5 job since 2008.