This week we’re welcoming Jason Hull, who is a personal finance columnist for U.S. News & World Report. He’s here to talk about psychological process of giving to charity, and how spending money on others can lead to happiness for yourself. 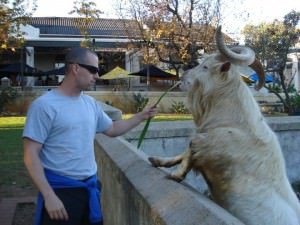 When many people think about their charitable contribution strategies, they rarely think of donating to charity first before spending money on other things. We’ve all heard the maxims that you should pay yourself first, set aside money for retirement, automatically contribute to an emergency fund, and the like, but how often do you really hear financial planners say to give away money first, then spend on other things?

Once you have covered your basic necessities — food, shelter, transportation, and clothing — and your financial obligations and debts taken care of, what then? How should charitable contributions play into your overall financial planning?

According to recent research from Harvard Business School’s Professor Michael Norton and others, spending money on someone other than yourself can actually promote long-term happiness. Norton conducted an experiment where he gave people an envelope with either $5 or $20 and told those people to spend the money either on themselves or on someone else before the end of the day. These participants then reported back on their overall happiness.

When asked what they thought would happen, the participants expected that more money spent on themselves would provide the most happiness. They were wrong.

The results: When people spent money on others, they were happiest. Furthermore, the amount of money spent didn’t matter; it was simply engaging in the act of prosocial behavior which caused people to be happy.

The act of giving triggers responses in our limbic system, the subconscious part of our mind which is still concerned with hunting, gathering, and not being squashed to bits by wooly mammoths, which I call Monkey Brain. Monkey Brain usually concerns himself with eating more chocolate cake and buying that flat screen TV for the man cave, rather than investing money for retirement, since retirement is so…far…away.

In this case, though, giving is actually tickling places that Monkey Brain likes. Giving money away triggers responses in the ventral striatum, which is the same section of the brain that lights up when we see pretty faces or beautiful art. Yes, Monkey Brain gets more hedonic pleasure out of giving money away than he does in buying Jimmy Choo shoes or the newest Xbox 360 game.

Why is this so? It’s because the action of giving away money serves two purposes inside our minds. First, it creates congruence with what we tell ourselves our values are and our actions in demonstrating those values. We all like to think of ourselves as genuinely good people who care about others and try to contribute something back to the world. Very few people truly want to simply leech off the work of others. Thus, giving creates that alignment. We can tell ourselves we really are good people because we give to others.

The second part of the equation involves creating cognitive dissonance within ourselves. Cognitive dissonance occurs when our actions don’t match up with what we think. In this case, giving away money implies that we have a surplus of money and that we lead a rich life. After all, if we didn’t have sufficient amounts of money, we wouldn’t be able to give it away. The act of charity creates a mindset of abundance, convincing Monkey Brain that he doesn’t really need to hoard his bananas. This mindset also leads to greater happiness, which makes us more effective at work, fun to be around, and happier in our family lives — all of which lead to better financial situations over time.

However, there is a paradox of giving. Once you’re made aware of the benefits of giving, the intrinsic motivation disappears, and the happiness you gain from it goes away. At its core, it’s the difference between giving because you want to and giving because you must. If the giving occurs not as a result of thoughtful introspection and deliberate choosing of the recipient, but, rather, in the same manner as mandatory corporate fun days, then the benefit doesn’t happen.

How can you give and avoid the paradox?

Giving away money won’t magically make more money appear in your accounts overnight. But, it will make you happier, which will, in turn, set in motion a series of events in your life which will yield positive changes.

About Jason: Jason Hull is a candidate for the CFP(R) Board’s certification, is a Series 65 securities license holder, and owns Hull Financial Planning. He blogs regularly on his website and is also a personal finance columnist for U.S. News & World Report. You can subscribe for free to his 52 week Personal Finance Game Plan and receive the free e-book Four Places Your Monkey Brain Should Never Live.