Wednesday Welcome: Cut Your Spending by $1,000 a Month

This week we’re excited to welcome Brian J. O’Connor, the writer of the “Funny Money” column for The Detroit News. His new book, The $1,000 Challenge: How One Family Slashed Its Budget Without Moving Under a Bridge or Living on Government Cheese, chronicles his ten-week quest to cut his family’s living expenses by $1,000 a month. If he could do it, so can you — and we asked him to share how in the guest post below. 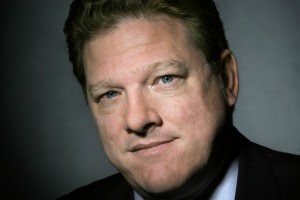 The first thing you need to know is that I have never eaten raccoon. Although I am not making any promises if the varmints don’t stay away from my tomato plants.

Chowing down on backyard wildlife never crossed my mind, until the depths of the recession, when a fellow columnist at my newspaper, The Detroit News, found a downtown hunter helping people stretch their budgets with $12 raccoon roasts. His sales pitch: “Tastes like mutton.”

It’s no secret that my hometown was ground zero for the economic collapse and the glacially anemic recovery. But as the personal finance columnist for The News, the idea that people were barbecuing roast raccoon rump got me wondering how I could really help my readers.

So, right there in my column, I vowed to slash $1,000 from my family’s monthly budget by cutting $100 from each of our 10 biggest spending categories. Over the course of 10 columns I even managed to beat my goal — by a whopping $1.40. 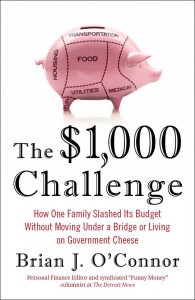 All the details are in my new book, “The $1,000 Challenge: How One Family Slashed Its Budget Without Moving Under a Bridge or Living on Government Cheese.”  Here what I learned:

Start with the big stuff: It’s great to find a sale that knocks $40 off a new set of tires, but that only saves you $40. Change your long-distance plan to save $5 a month and you’ll be ahead $60 a year every year. After three years that’s $180, which means those next two radials are free.

Ben Franklin was wrong:  He claimed that a penny saved is a penny earned, but that was before the income tax (plus I suspect Ben fried the math part of his brain by flying kites during lightning storms). A penny saved is nearly a penny-and-a-half earned before taxes. Put $100 in your savings and it’s like getting a $142 raise. Even better, your savings can’t fire you and won’t throw lame-o office parties where Tracie from accounts payable makes the DJ play ABBA all night.

Don’t spend to save: Cut your immediate spending so that your cash lasts as long as possible, and never spend money to save money. Don’t sink thousands into a solar water heater in hopes that the gizmo’s savings will pay for itself sometime during, say, Malia Obama’s second term.

Start now: Don’t fuss with tracking every expenditure for an extensive budget. Concentrate on cutting spending and freeing up cash, not creating an beautifully color-coded, spreadsheet that tracks every penny with the ruthlessness of a Kardashian searching for a photo op.

The extra breathing room that cost-cutting put into my family budget was a lifesaver — and not just for me. When a wood-chuck burrowed under the house, we could even afford a “wildlife relocation specialist.” He set his trap, then returned to find it occupied — by a raccoon.

“What do you want me to do with him?” the trapper asked.

I looked over the raccoon’s fat, furry haunches, but figured there’s probably a good reason we don’t see a lot of TV ads touting, “Mutton! It’s what’s for dinner!”

So I let the furry little bandit loose. As I watched him scamper off at least one of us, I knew, felt like the luckiest critter in Detroit.

About Brian: Brian J. O’Connor covers personal finance and the economy for The Detroit News. His “Funny Money” column humorously chronicles the financial implications of everything from potty training and the Pregnancy Industrial Complex to tax avoidance and the shadowy international baking cabal that forces consumers to buy unnecessary hot dog buns. In addition to winning three humor-writing awards from the National Society of Newspaper columnists, he is a two-time Best in Business winner for his column (syndicated by the Tribune Content Agency), as well as an awarded finalist in the Scripps Howard National Journalism Awards and winner of the Christopher J. Welles Memorial Prize from Columbia University. He holds a bachelor’s degree in liberal arts from Sarah Lawrence College and earned a master’s of science in journalism at Columbia University, where he was a 2001 Knight-Bagehot Fellow in Economics and Business.