When our friend Jeff Yeager — you may remember him from his previous guest post — reached out to share some shocking money facts from last year, we knew they’d make a fun guest post. Not only can you count on him to have interesting tidbits of information to share, he’s always good for a laugh! 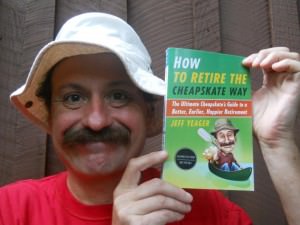 Being The Ultimate Cheapskate and writing about money for a living has its perks. For example, when I visit our local membership warehouse store, they know it’s a lost cause and immediately reload all of the free sampling stations when I walk in the door. And the other day when I called our longtime insurance agent to have our annual chat about ways to lower the premiums on our bundled policies, he launched a preemptive strike and offered up a couple of creative options for doing just that, without me even needing to ask.

Best of all, in my line of work I’m privy to a constant influx of press releases, survey findings, and other money-related data that makes for truly fascinating reading (really!). Years ago I started keeping a list of some of the more shocking financial factoids I ran across each year, compiling them into an annual top ten list. So here they are, in no particular order, my Top 10 Shocking Money Facts from 2013:

About Jeff: Jeff Yeager is the author of four popular books about frugal living, including his most recent, “How to Retire the Cheapskate Way.” He is the host of “The Cheap Life,” a weekly web show on YouTube.