In 2003, The Washington Times reported, “It’s Unreel: DVD rentals overtake videocassettes.” Just ten years later, not only are VHS tapes less popular than DVDs, they are well on their way to extinction. Really. If you don’t store them properly (i.e. in a temperature controlled vault or dry basement) “they get oily and sticky and become unplayable, said Donald Bell, senior editor at CNET.

That’s not such a huge deal when it comes to your copies of Dirty Dancing or Jurassic Park. They’ll live forever on Netflix and cable. But your priceless home videos — first steps, dance recitals, 10th birthdays and more —  could be lost forever. That makes preserving the content of the tapes is a more important task than ever before. 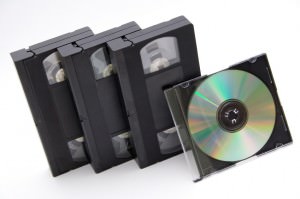 “These are in a sense, a time bomb in terms of being able to get content off of them and not turning into muck,” Bell said. Tapes that are 20 years old will already have lost a little definition and gained a little fuzz; in another 10 or 20 years, those tapes might be so blurry or oily that preserving them isn’t worth it.

So what do you do if you don’t want the tape of your kids’ kindergarten graduations gone forever?

There are two options: Buy equipment and convert your content to DVD yourself, or send the VHS tapes off to a professional conversion service. Video and technology experts will tell you that each option comes with its own pros, cons and costs.

To do-it-yourself, the biggest investment in converting your own movies isn’t money, it’s time. A  hardware/software combo package like Easy VHS to DVD for Mac ($79.99) or VHS to DVD 7.0 Deluxe for Windows ($59.99) that helps you copy the VHS and clean up the resulting digital video can be a cost-effective way to go, said Geek Squad Agent Derek Meister. But you need to have some time on your hands.

“A two-hour videotape will take two hours [to convert],” he said. “That tape has to be sitting there playing for two hours while your computer records it. If you have a whole bunch of videotapes…” You can do the math.

Using a package like these also assumes you still have your old VCR. If you don’t, that likely means buying a DVD/VCR combo player, which retail anywhere from $109.99 at Best Buy to $179.99 at Radio Shack. However, think twice before you rush out and get one.

“There’s a point of diminishing returns,” Meister said. “If your original VHS tapes have been sitting in your attic for 15 years, they’re probably not the best quality in the first place. That’s a situation where you won’t need high-end technology.” In other words: pouring hundreds of dollars into conversion equipment for your home isn’t going to change the end result. If the bill is adding up, it might be better to look into a different conversion method.

The second way to convert your VHS tapes is to go the professional route and use a service like Photobin, iMemories or Walmart’s VHS conversion service. The price of the professional conversion will vary depending on which service you choose and the number of tapes you provide: Photobin charges $23.99 to convert one tape but $299.99 to convert 30 tapes (bringing the price down to $10 apiece). iMemories is normally $14.99 per tape (on sale right now for $9.99 per tape) and Walmart starts its pricing at $19.96 for two tapes.

“If you have two or three tapes with a grand total of three or four hours of content, it might be worth it to do it yourself over a month, an hour here and there. But if you have 30 hours of video, it may not be worth your time,” Meister said. “It’s really a time versus money question.”

“I think some people have the hope that there’s going to be an automatic, James Cameron effect,” Bell said. “But weird tracking glitches, the grit and the poor audio quality, everything that came along with the VHS tapes will be there — just in a more convenient format.”