Try-It-Out Tuesday: SavedPlus Helps You Save While Spending

In 2001, much of today’s technology probably seemed more like pipe dreams than realities of the near future: Phones that tell you the weather? Digital books whose pages turn with the swipe of a finger? An invisible “cloud” that can store thousands of documents and photos? Cool, but years — nay, decades — down the road.

Paul Sorokin can empathize with the developers of these phones, books and clouds. In 2001, he too had a crazy idea: what if, every time a person buys something, a percentage of that purchase also goes into a savings account? Again, cool, but something that would require technology that just did not exist. 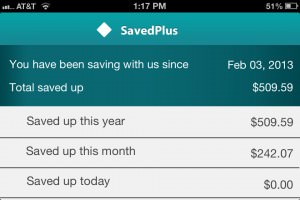 Twelve years later, the technology finally exists, and thanks to Sorokin and co-founder Nikita Brodskiy’s persistence, so does SavedPlus. It’s an app that — just as Sorokin envisioned in 2001 — helps kick a set percentage of a purchase into that shopper’s savings account.

“We created SavedPlus to help people in a category other than those who were successful [with] savings already,” Sorokin said. “Set it and forget it. SavedPlus creates a mechanism where people save money out of every purchase slip or outgoing transaction they have.”

It works like this: after entering your bank account information and setting your desired savings percentage — for example, 5% of every purchase — SavedPlus captures all your transactions. You put a $5 latte on your debit card? SavePlus kicks $0.25 to savings. You have your $125 cable bill on autopay? SavedPlus sees that, too, and deposits $6.25 into savings. The app is bank-independent, which means you can start using it today with your current savings and checking accounts — you don’t need to set up accounts with a third party.

For those who might be facing very large purchases — maybe a fridge is on the fritz or a child is heading off to a pricey private university — Sorokin has built in safeguards so that these transactions don’t team up with SavedPlus to completely deplete a
checking account. There are ways to set limits on the transactions SavedPlus pulls from (for example, a limit of $1,000 means you won’t see 5% of that fridge, or the tuition check, kicked into savings), as well as limits on your account balance. If you like to keep an account buffer of $750 in checking at all times, a set minimum balance of $750 means SavedPlus will stop working if your balance dips under that amount.

“We realize that there are a large group of people who don’t save because they lack self discipline, they don’t feel they can do this consistently; there are many different reasons,” Sorokin said. “We’ve been using it for a number of months, and we see people excited. It’s like, ‘Wow, I’ve been not noticing, but I saved $800!’”

For the first 90 days of use, SavedPlus is free. After that, the app takes 5% of what users save each month (up to $5) as compensation. Sorokin and co-founder Brodskiy say this fee will help cover the cost of all the transactions SavedPlus is a part of.

“When we get partnerships on board, we’ll definitely change our pricing model,” Brodskiy said. “Our goal is to make it completely free.”

That isn’t their only goal. SavedPlus launched just last week, but Sorokin and Brodskiy already have a list of features they can’t wait to start implementing — including the ability to put savings towards a specific goal or micropayments towards debt.

“Credit card companies and other debtors build interest daily,” Sorokin said, noting the next problem SavedPlus hopes to tackle. “More frequent payouts will minimize interest and help [our users] pay out the debts.”