Try-It-Out Tuesday: How To Make Working From Home Work For You

To say that working from home has been a hot button issue recently would be a bit of an understatement. Yahoo CEO Marissa Mayer started the firestorm by announcing that she would be revamping the company’s telecommuting policy and sending everyone back to the office. Then, MarketWatch published this article saying that telecommuters have a greater chance of being passed over for a promotion than their on-site counterparts. Considering the debate, it’s only natural to wonder: is working from home career suicide?

It’s a question that applies to more Americans than ever before. According to a U.S Census Bureau report issued late last year, the number of people working from home has grown more than 40 percent over the past decade, up to about 13.4 million telecommuters. Whether that number continues to grow in light of policies like Yahoo’s, and, more recently, Best Buy’s, will 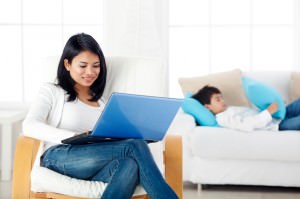 largely depend on the field, position and person that is transitioning from the cubical to the couch.

“It’s how aggressive you are and how ‘leaned-in’ you are and what your work ethic is. That’s how you get growth,” said Patty McCreary, an engineer who telecommutes for a technology company called Double Prime.

McCreary’s journey to telework will sound familiar to any working parent: prior to having kids, she was logging 60 hours a week. She tried to maintain her this pace for a year or two after becoming a mom, but found the commuting — coupled with the time away from home — to be untenable. After reaching out to FlexJobs.com, she found her position at Double Prime and hasn’t looked back.

“I have three kids under the age of five,” she said. “I need every moment of every day.”

Monica Clarke, an interactive marketer who telecommutes for a PR firm in New York City, similarly sees her work-from-home job as a rung up on the career ladder, not down.

“It’s on a better career trajectory actually,” Clarke said, noting that her current position demands more of the skills she developed in college than any previous position she had. As a military spouse, Clarke and her husband need to move around a lot, but the ability to move her workplace with her means she can work without interruption. Last month, when she and her husband had to move from North Carolina to Colorado, provided the most recent illustration of what there is to be gained from such a flexible work environment.

“My company, the Wakeman Agency, has seen no hiccup,” she said. “Even on the road, I was able to prep everything. It makes things really smooth.”

Clarke and McCreary represent workers who have used online resources (like FlexJobs.com or MomCorps.com) to find existing telecommuting jobs; however, this is not the only way to put a home office to use. Jennifer Forest, author of the forthcoming Work Women Want, noted that starting a business from scratch can be another great, if not challenging, way to go.

“You take a skill you have and look for your own client base,” she said. “Build on your networks. It’s easier to build on skills you have and work with old clients.”

Forest acknowledges that building a business can be a daunting prospect for a lot of people, which is why her website features a list of industries that lend themselves well to telecommuting or even bringing kids to the worksite. She says the key to getting hired in — or even promoted within — these spaces, or any other industry, is to focus less on where the work is coming from, but the quality of the finished product.

“Purple cow them,” she said, referencing Seth Godin’s book of the same name, which encourages people to stand out in business by focusing on the remarkable. “Sell how your skills can be so much better than someone else’s, regardless of where you work.”