It’s not news that lawyers get a bad rap on television and in movies; they’re the frequent butt of jokes and even the “good” ones have moments of moral ambiguity. However, Richard Komaiko wants people to know that these stereotypes are, in fact, just stereotypes.

“Most attorneys are incredibly friendly and deep down in their core the reason they got into it in the first place is they wanted to help people,” Komaiko said. “Most of them will be happy to talk to you for free for up to an hour to give you a sense of whether or not [hiring them is] worth your time. Attorneys are a lot more friendly than people assume, and a lot of them just want to help.”

Komaiko is not trying to do damage control for the legal industry. Just the opposite, in fact. He’s the CEO of AttorneyFee.com, a site dedicated to making the hiring of a lawyer a more transparent process. On AttorneyFee, those in need of a lawyer can enter their specific legal need (“divorce attorney” or “estate planning,” for instance) and their zip-code. AttorneyFee will not only generate a list of attorneys in or near that zip-code, but it will show how many years of experience each lawyer has, as well as their hourly rates. 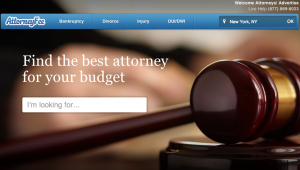 While AttorneyFee was created in 2011 (founder BeiBei Que was a practicing lawyer whose office was inundated with calls from potential clients about the cost of various services), Komaiko says the site has recently experienced tremendous growth, accumulating data on over 90,000 attorneys across the country and partnering with LegalZoom, the online legal document service. And according to existing AttorneyFee data, these are services people need more than ever before.

More than 4 million Americans search for an attorney each month, and fees can vary by as much as 230 percent within the same city for the exact same services. This, Komaiko says, is why it’s important for potential clients to arm themselves with as much information as possible before actually hiring an attorney — and why they shouldn’t be afraid to negotiate.

“If an attorney says ‘my normal rate is $250 per hour,’ I’d say 7 out 10 times, if you counter and say ‘I’ll do $200 an hour,’ they’ll still be happy to do the work,” he said. “An attorney is no different than an hotel. A hotel loses money when the rooms aren’t filled. An attorney is the same. If he has unoccupied rooms, so to speak, he’s not making money.”

Komaiko recommends conducting the negotiation before any legal proceedings begin, but in his experience, it’s still possible — and even advisable — to haggle when the bill finally does come in the mail.

“Attorneys assume the client will ‘write down the bill,’” he said, noting that “writing down the bill” is lawyer-speak for haggling. “A lot of attorneys will jack up their rates because they’re expecting you to quibble. If they really want to make $3,000, they’ll bill it out at $5,000 and assume you’ll negotiate down. Because [of this], I always advise people to try. If you don’t argue it down, you’re paying to offset the cost of all the other people who did write down the bill.”

Ultimately, Komaiko wants people to treat the legal industry the same way they treat the medical industry. Which is to say, if it seems like there is a small problem (like a cold), consult an expert before it blows up into something much harder to manage (like pneumonia).

“If you are facing a problem, it’s worth getting a consultation from an attorney. Most of the time it will be completely free to find out if it’s the type of thing an attorney can help with,” Komaiko said. “The problem most people have is they never consult an attorney and then once there’s a problem, it’s big.”