With all due respect to the Bard, it’s not just the course of true love that never did run smooth — it’s intra-family communication.  In other words, talking to mom and dad.

According to Fidelity’s Intra-Family Generational Finance Study, parents and their adult children are as at-odds with each other as they were during the kids’ turbulent teenage years. The only difference? Instead of arguing over allowances and curfews, parents and their adult children don’t see eye-to-eye on how, when and how much they should discuss family finances. 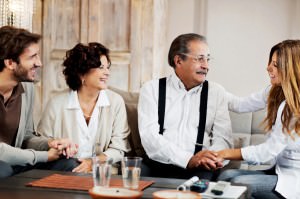 “For myself, when I got new jobs, I could talk to my father about how I should set up my retirement accounts and what benefits I should take,” he said. “As a father, I’ve got kids who recently graduated high school, and those [changes in their lives] created opportunities as well.” He noted that when his son’s first tax refund came in, he used it to open the door to a conversation about saving for the future.

Hevert recognizes that retirement and estate planning can be stressful subjects to broach, but talking about it can be the best way to relieve that stress. One part of the study found that even though two-thirds of parents surveyed say they have already factored potential healthcare costs into their retirement strategy, they have not fully communicated their “eldercare” strategy to their adult children. This disconnect doesn’t have to exist.

“It keeps people up at night, wondering if their parents are going to be okay,” he said. “You gotta get on the same page.”