Thought-Provoking Thursday: When Will Kids Be Financially Independent?

Has empty nest syndrome officially gone the way of the dodo? There is, after all, much evidence that the Millennial generation is returning Chez Mom-and-Dad in droves: Failure to launch, wrote Forbes in 2012. “Cluttered nest syndrome” and “babygloomers,” a Philadelphia magazine writer recently complained. And according to new research, more teens than ever before say they’ll be dependent on their parents until they turn 25 to 27. 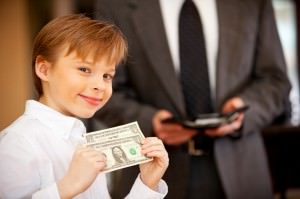 The Junior Achievement USA (JA) and Allstate Foundation’s 2013 Teens and Personal Finance Poll found that 25 percent of teens say they won’t be financially independent until age 25 to 27. This is a big jump from last year’s findings, in which only 12 percent of teens predicted they’d be financially dependent until age 25. What’s more, JA and Allstate found that 42 percent of teens say they don’t budget because they’re “not interested,” and 41 percent say they’re unsure that they’re using credit cards successfully. This begs the question: how can children ever become financially independent if they haven’t mastered the basics?

“Our experience has been that most parents feel ill equipped to talk to their kids about money,” said Jack Kosakowski, CEO of JA. “It’s a vicious cycle. Kids raised without [money] experience, they don’t pass it on to their kids and the cycle continues.”

This isn’t to lay all the blame on parents — Kosakowski noted that when any adult (even a teacher) tries to teach kids about money, they tend to overcomplicate the lesson, obscuring what he sees as the three most essential points: you can’t spend more than you earn, you should save a little bit out of every revenue source you have (even if it’s 50 cents, he noted), and what it means to be responsible credit card user.

“When adults try to teach budgeting, they talk about house payments, which kids can’t relate to,” he said. “Making it real is critical to kids grasping it.”

Kosakowski recommended using examples kids can relate to, like smartphones and designer jeans: “If I buy a cheaper pair of jeans at $40 or $50 versus designer jeans at $110, what can I do with that difference?”

The JA and Allstate study also found that 52 percent of teens think students are borrowing too much money to go to college, yet only nine percent reported that they’re actually setting money aside for their own education.

“We wonder why kids are ending up with college debt,” Kosakowski said. “Parents should think about that as soon as they have a child. [Then,] as soon as they start getting into upper elementary, middle, and certainly high school, that’s a great way to have a money talk. It’s never too early.”