Maybe you live alone. Maybe you choose to eat lunch by yourself, rather than with a group. Maybe you just ended a relationship. While each of these choices provides independence, quiet, and some necessary “me” time, new research suggests they might also be making you take bigger risks with your money. 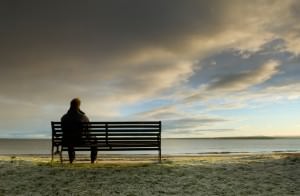 People, generally, get what they want two ways — via popularity or with money, Duclos explained in an email.  “Popularity ensures that other group members are willing to provide what one needs to flourish in life — like, food, shelter, security,” said Duclos, an assistant professor of marketing at the Hong Kong University of Science and Technology. Money also makes it possible to get these things. That’s why he and his team predicted that consumers would turn to money in the absence of popularity.

“Because experiencing interpersonal rejection heightens the instrumentality of money for obtaining benefits from the world,” he said. In other words, when you’re turned down — or out — by your crowd, you try to buy your way to happiness. And in doing so, you take on additional risks.

So what’s the takeaway? Don’t make important financial decisions following a breakup, a fight with friends, or any other social mishap. “Even momentary feelings of loneliness or isolation can substantially alter one’s financial decisions,” Duclos said.

While the researchers can’t yet say when consumers are at their most vulnerable — that is, whether a lonely lunch makes for riskier decisions than the time after a breakup — he does have one warning to divorcees, widow(er)s, and others who find themselves making financial decisions by themselves. “Given the consequences of social exclusion for risk taking, some marketers with questionable ethics may be tempted to isolate (either physically or psychologically) prospective clients during the negotiation process since doing so may result in larger commissions,” he wrote in the study. “As such, consumers would benefit from being aware of the tricks available to unscrupulous financial services providers.”

The other option, of course, is to have company when you go to a meeting with a broker or salesman. “Bringing a friend, or any sort of social support,” he said, “would indeed counteract feelings of loneliness.” And not to mention, give you the benefit of a sounding board off which to bounce your good (or not so good) ideas.