The world of college financing is often one big game of good news, bad news. Good news: you got into your dream school! Bad news: the financial aid package isn’t what you hoped. Good news: Congress doesn’t want student loan rates to get too high! Bad news: they don’t agree on how to keep rates low.

Recently, there was another entry in the good news, bad news game, courtesy of two new studies on college savings strategies. First up, the good news: according to a recent survey by the College Savings Foundation, more high school students indicated a willingness to save for college and work part time to avoid student loan debt. Specifically, 53 percent of students surveyed said they have already gotten a job to earn money for college, and 77 percent said they’ve already saved $1,000. That could be two semesters’ worth of books! 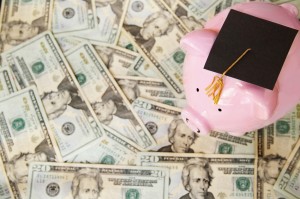 “It may speak to we’re doing a better job of preparing kids about what’s the best fit and what they need to do to be contributing,” said Roger Michaud, chair of the College Savings Foundation. “I think it’s great that they have a pool set aside. It could be that a number of high schoolers have more than that. $5,000 is probably three four years of books.”

The survey also found that 93 percent of high schoolers say they’re going to continue to work during college. While they didn’t indicate how many hours they plan on working, Michaud noted that working at the expense of taking a full course load could lead to a fifth or sixth year of paying tuition — which is hardly ideal.

“The last thing you’d want to do is extend your college years from two-to-four to five or six,” he said. “If you could work enough to help chip in for books and CDs and what have you, and then you get some aid, that might reduce the amount of debt you’re taking on. Parents and students should realize that if you’re going to extend your stay to college in a fifth year or sixth year, you gotta put pen to paper [and see if it makes financial sense].”

As for the bad news: while high schoolers seem to be on top of the college savings game, a different survey — this one from financial services firm Edward Jones — found that their parents have some catching up to do. Specifically, just 31 percent of adults say they know what 529 plans are. (In case you’re among the 69 percent scratching their heads: a 529 plan is a savings plan that lets you save and invest money for educational purposes, and is often tax-advantaged. Think IRA, but for college.)

“It is shocking,” said Greg Dosmann, college savings expert at Edward Jones. “We’ve got a lot of work to do to educate people on how to save for their children.”

Dosmann attributes part of this knowledge gap to a self-fulfilling prophecy: those who used 529 plans to pay for college saw the benefits — they’re flexible, tax-advantaged, and grandparents, aunts and uncles can help contribute to the stockpile — and are more likely to open accounts for own kids and even grandkids.

For parents daunted by the prospect of saving tens of thousands of dollars for college, Dosmann has a few tips to make the process easier. “As soon as the child is done with daycare, take the daycare expense and put it in a 529 plan. It’s money already being spent, it’s already budgeted for,” he said.

For grandparents and other relatives who might want to encourage saving, Dosmann recommends creating a system similar to that of a 401(k) with a match. “Grandparents will go to the parents of the child and say, ‘We’ll match up to a certain percentage per month if you put that amount in as well,” he said. “That’s why we like to say, ‘it takes a family.’”