The Economics of Marriage 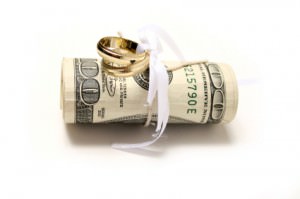 Bill: How much did you make last month?

Bill: You have to sign over what you’re making to the common pot.

Margene: It’s a little more complicated than that. I think we should talk about accountants, and money managers, and lawyers.

That’s how it went on a recent episode of “Big Love.” Yet another example of how far – in our earning power and our intention not to cede the managing of that money – women have come. A report in mid-January from the Pew Research Center, entitled “New Economics of Marriage: The Rise of Wives,” confirms it with data. Women have made big gains in both education and in income. But rather than wreaking havoc on happiness and leading to an increase in divorce, it did the opposite. The effects were largely positive.

On the whole – yes – but what about relationships where the balance of power changed over time? “That would be a good question,” acknowledged D’Vera Cohn, one of the study’s lead researchers. “We took four or five snapshots of the population over time. We didn’t look at what changed in individual couples.”

Would it be equally rosy, I wondered, in relationships like Bill’s and Margene’s? Granted, they’re polygamists. But let’s put that aside for a moment. He married her – his former nanny – with the understanding that she’d take care of house and home and kids. This season she’s become a sensation on Utah’s equivalent of QVC and the balance of power has shifted. In cases like these, where the situation is not the one that either spouse signed up for, I suspect greater difficulty.

Psychologist Gail Saltz, whose most recent book is The Ripple Effect, says I’m right. “If it’s a desirable evolution for both people, when you have two people with high education levels and she is moving into a new career that brings an increasing income that might be just fine,” she says. “But it’s something different when you have a woman who started making money because her husband lost his job. And it’s something else still when it’s a woman who started making money because she changed and started wanting something.”

In that case, the key to the sort of happiness in the Pew study seems to be three things: open-mindedness, communication and finding another way to make him the man. Let’s take them one by one. First, the open mind. Gender roles, where he provides the financial support and she the emotional support, are not important to everyone, Saltz says. But if you were raised believing that to be the man is to be the protector and to be the woman is to be the nurturer and those roles get shifted – it’s probably not working for either of you.

Especially when that trying occurs in bed. “If financially it’s not happening, you have to find other ways to make him the man,” she says. Because although we (and by we, I mean women) have little problem pointing out how hard this breadwinner swap is on men, we don’t realize how hard it is on us. What a lot of women don’t realize, Saltz points out, is that they start to feel less attracted because he seems less masculine because he’s making less money.

“It’s like his penis shrank,” she says bluntly. “Now you’re less attracted to him, but you’re the one who chopped it down to size. And he feels less masculine, too. You have to figure out a way to pump it back up again – to make him the man’s man in the bedroom while you can be the femme fatale.”

Oh – and just to be safe – you might want to throw in help around the house. That’s the suggestion from Andrea Doucet, who has interviewed more than 50 Canadian and American couples where the woman out-earns her spouse for her blog breadandrosesproject.ca. “It doesn’t matter who’s earning more,” she says. “What matters is what shifts at home. Yes, men are doing a lot more at home – with the children. But the evidence is it doesn’t translate into actual housework. That can be a tension point in the marriage.” One thing that helps, for lack of a better word, is hiring help – something middle-class women did not do much of in the ’70s, Doucet notes, but do avail themselves of today. Thank goodness.