My Experience Shopping for a Used Car 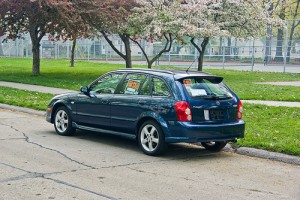 Over the last few weeks – okay, over the last year if I’m being honest about it – I’ve been contemplating buying a used convertible.  No, I’m not having a mid-life crisis.  At least I don’t think I am.  But I’ve been looking at cute little cars with their tops down for such a long time, pondering the prices, mulling the colors, and perusing one website after another that my husband finally said to me: Could you either buy the damn thing already or stop talking about it?  I bought it. It’s a white VW beetle with a black interior. I toyed with the concept of learning stick to buy the cute red one from the early ‘70s but then remembered that my friend Gary’s attempts to teach me how to drive his manual transmission car many years ago had ended in tears.  And this was a man I wasn’t dating who had a huge amount of patience.  For me, automatic or nothing.

During this long and drawn out shopping process I learned a few things about shopping for used cars in this Internet age.  I thought I’d share.

1.     Websites lie.  Well, perhaps lie is too strong a word, but they – or the people who run them – don’t seem to feel a huge compunction to keep their information up to date.  Twice, I went running to test-drive cars that were no longer available.  One had already been sold.  One had been sent out another showroom in the network. I learned my lesson: Call ahead.

3.     Cargurus.com rocks.  As I signed onto various websites (Autotrader.com, Cars.com, Ebay, Edmunds) I saw many of the same listings, but also some different ones.   It took a while to figure out what was a good deal vs. a so-so one, until I landed (I’m not exactly sure how I got there, but it became my bible) at cargurus.com.  Again, it didn’t have every single used car listing, but it had most of them.  And atop that, it comes right out and tells you.  This is great deal, a fair deal, a lousy deal.    It made me feel more confident.

4.     Shipping a car is not the worst idea in the world.  Before I settled on the bug, I was toying with the idea of a Mini Cooper.  Another adorable car, but really tough to find in convertible form with automatic transmission.  I figured shipping a car across a few states (even across the country) would be prohibitively expensive.  It turned out to be a lot less expensive than I thought.  I even found that by putting my query out there, I could get shippers to bid on my business.  In the end, I didn’t need it.  But just in case you do, it’s possible.