Ask Jean: What to Do With A Windfall 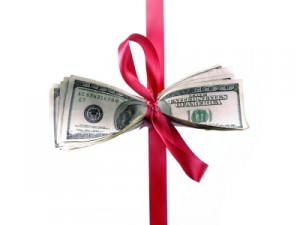 My father in law gave us 10,000 dollars as a gift. What should we put it in? Maybe a CD? I also want to start a college fund, but I don’t want to pay a penalty if my daughter doesn’t go to college, or wants to go to a trade school. – Mary, New Jersey

That all depends what the money is for. Usually, when you have a large sum of money, you’ll want to choose to either save it or invest it – unless you have a large amount of debt to pay off at high interest rates – then, you might want to put it towards paying down some of those bills. It can help you alleviate some of the monthly pressure, too, that happens when you have high-interest debt.

A CD can be a good option if you think you’ll use the money in the short-term – say within the next three to five years. If you have plans to put a down payment on a home or a car, or are looking to make another big purchase, you don’t want to risk losing principal.   You probably won’t earn much – according to BankRate.com, interest rates on a 1-year CD are averaging around .69% nationally – so either keep your money very short-term (say 6 months to a year) so you can reinvest when interest rates jump or look into the adjustable CD from ally bank.

If it’s for your child’s college fund, I’d put it in a 529 college savings plan (go to savingforcollege.com to find the best one for you). The great thing about 529 Plans is that they can be used for traditional colleges and universities, as well as for trade schools. And if you have more than one child, and one chooses not to go to college, you can put that money toward your other child’s education. For more tips on choosing a 529 plan, check out the article I wrote a couple of weeks ago here on my blog.

Next, check your emergency fund. I suggest having three to six months of living expenses in a savings account to use in the case of a financial emergency. Setting up and maintaining that emergency cushion is important. You should take a look at what you spend, roughly, each month on your housing, transportation, debts, and general living expenses, and if you don’t have at least a few months’ worth in a savings account, allocate some of that $10,000 there.

If you’re saving for longer-term goals, like retirement, then it’s okay to invest it in something a little more risky — like a stock market index fund — knowing you’ll eventually get more growth but you may have to ride the ups and downs of the market before you do. “Putting money away toward retirement is always a good move,” says Diedra Fulton, a Dallas-area fee-only certified financial planner. “Contribute the maximum amount to a ROTH IRA for 2010, if eligible, based on income,” she adds, “which is $5000 annually if you’re under 50, and $6000 if you’re 50 this year and older.”

If you’re well funded in each of these areas, and still have some leftover cash, have a little fun! “Consider using a small portion for taking an unplanned trip, splurging on a personal reward, or addressing some other ‘luxury’ you had not anticipated incurring expenses for,” says Fulton. Unless you’re in a dire financial situation, it’s okay to spend a little.